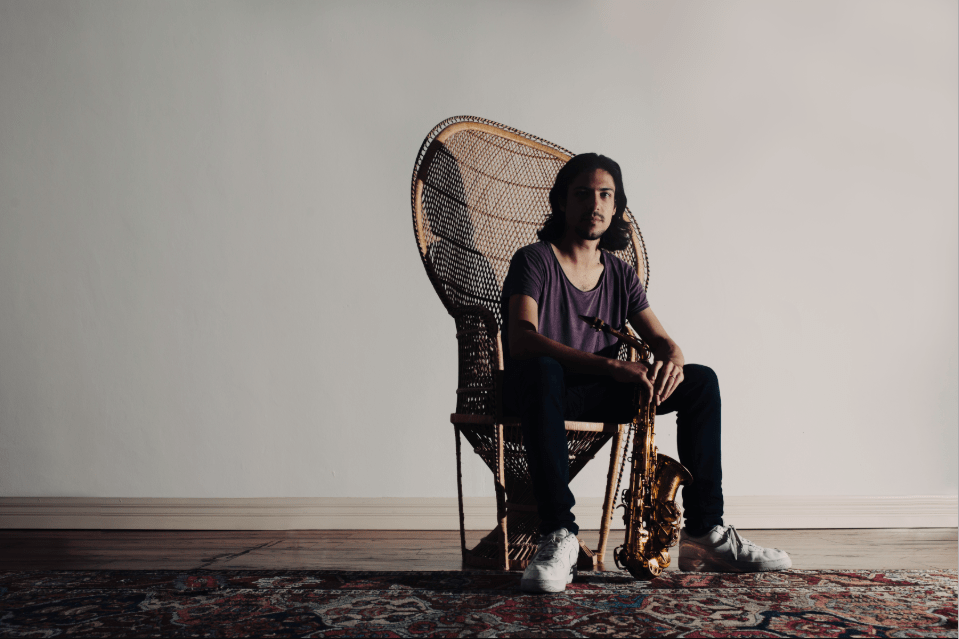 Josh Kelly: “Jazz is a Folk Music. It is Fluid, Live…”

This Melbourne saxophonist is the PBS Young Elder of Jazz recipient, a program that supports the development of a mid-career musician working in jazz. Josh will debut a new composition, Displacement, commissioned for the Festival as part of the Young Elder of Jazz program.

We asked to tell us more about Displacement and the story behind it.

Can you tell us a bit about the project? Where did the idea come from?

After leaving university, I spent a lot of time thinking about what I wanted to do musically, not really in terms of genre – I’ve always been very comfortable with being a jazz musician, whatever that means – but rather in terms of how did I want my music to intersect with society more broadly. I was doing a lot of research into my family’s background at the time and was thinking of ways I could try to represent some of those stories in my music. I was also trying to work out how jazz could be a mouthpiece for change in today’s climate, and so I came up with the idea for March to Izbica: a large ensemble piece that drew on the political fury of some classic free jazz musicians and larger ensembles like Albert Ayler, Sun Ra, Art Ensemble of Chicago and so on.

With Displacement, I wanted to elaborate on some of those ideas. I asked myself, how can I take an element of the social commentary and rawness of March to Izbica, the modal jazz and rhythm cycles of my trio, and apply it to a new group whilst drawing on the beauty and abstraction of French Impressionist music to broaden some of the possibilities.

The idea was born out of this search. To musically represent something that was unique, honest, new, and reflective of my background and influences.

Why is jazz the genre that works for a piece like Displacement?

Jazz is a folk music. It is fluid, live, and highly reactive to its environment. You can feel its energy in a room while it shifts and evolves, bouncing and responding to those in its presence. Displacement is a story of multiple migrations, and that story doesn’t begin or end in any one place. It is not set in stone, and no one single person owns it. The story of migration is fluid, and like jazz, continues to evolve and shift with its people.

What has your process been like in creating Displacement?

I started with the creative concept:

I then created a mind map of all possible ideas that could work in this imaginary musical landscape. Some things were quite specific – “cluster chords”, “non-functional harmony”; while other things were quite vague and intangible. One phrase that comes to mind, flowed out onto the page in messy excitement was “Impressionist abstraction – to begin to imagine other worlds and states of consciousness”

After mind mapping and letting ideas ferment, I got more specific with my objectives and musical parameters and then got into the studio to experiment. Given that I was writing for a chordless ensemble, and the room where the work was going to be presented (the Jazzlab) is very ‘dry’, as in it has very little room reverb, I stuck a brick underneath the sustain pedal of the piano so that I wouldn’t be able to rely on any artificial sustain while composing. I then used 5 fingers to each represent a tonal instrument as part of these impressionist-sounding chord progressions, and came up with a whole bunch of ‘sketches’. After that, I spent months fleshing out those sketches into fully formed compositions in a suite.

How did it feel to be named the PBS Young Elder of Jazz?

It was a really wonderful feeling! At the time I was going through a little bit of a rough patch and was feeling like all the hard work I was doing wasn’t getting me anywhere, that I wasn’t realising my musical goals and perhaps wasn’t worthy of any acknowledgement. In the midst of all of that, I received a call from Owen at PBS to let me know, and I swear I thought it was a joke. I’ve applied every year for the past 7 years and so seriously had no expectations.

That night, I caught up with a friend who also applied to celebrate and then got back into the practice room the next day to continue on the musical journey.

Your family has migrated all over the world: can you tell us a bit about your own story of ‘displacement’?

I was born in South Africa to first-immigrant and first-generation parents. My dad moved to South Africa from the UK, while his parents were of Armenian and Irish descent. My mum’s family are European Jews hailing from Germany and the Alsace-Lorraine region. Her parents made it to South Africa as a safe haven from the violence in Europe during WWII.

I was born in South Africa and saw apartheid come to an end and Mandela sworn in early in my life. Whilst we all loved South Africa, after years of deliberation my parents decided to move our family to New Zealand for a less violent, and a freer environment in which to raise us.

For the first few years my dad travelled between the two countries for work, while my mum predominantly bought us up – I have an older sister and younger brother. I remember first being awe-struck at the fact New Zealanders didn’t have electric fences around their houses and that I could ride my bike around the neighbourhood without parental guidance. I felt really free and spent many years running up and down the top of the wall on the side of our house, maybe in some kind of defiant symbolic gesture!

My parents experienced a form of culture shock in New Zealand and proposed moving to Australia when I was in high school, as they had a few ties to the community here. It was absolutely heart-breaking for me, as I had only just started to find myself after the first move. I however decided to move to Melbourne after finishing school, so as to go to uni here and immerse myself in the music scene I had heard so much about.

Is a sense of self and belonging inextricably linked to place?

Jews in the Diaspora can tell you that a strong sense of self and belonging can transgress ‘place’. However, at the same time there is often a deep-seated longing for ‘home’, a place from where you originate or have some link to. Which illustrates to me that ‘self’ is inseparable from ‘place’, but not necessarily dependant on it.

Where is the musical inspiration coming from? What elements are you drawing in?

Where is the ‘real world’ inspiration coming from? (ie places, sounds, memories etc)

I’ve always been attracted to modal jazz in a kind of primal way. I think this comes from one of my first memories of music, which was of old Jewish prayers sung in synagogue, as well as the modal chants of Rabbis reciting verses from the Torah.

Another formative memory was of seeing jazz musicians in the street of South Africa play what’s termed ‘Soweto Jazz’ or ‘High Life’. I saw this legendary South African jazz musician Kelly Petlane play the saxophone in the street when I was about 5 years old and thought that it was the most incredible sound I’d ever heard.

Those South African jazz musicians really told their own story with music. It sounded nothing like what was coming out of the rest of the world at that time. These formative experiences with music continue to be a source of inspiration for Displacement and my musical expression generally.

What can the audience expect? What do you think they’ll connect with?

Displacement is really interesting and unique. There are moments of bliss and beauty juxtaposed with power and madness. There are sections of groove that complement these dreamy soundscape paintings. I’m trying to portray the many emotions that go along with the migration story, and so there will be some surprises in there.

There is a lot of space for the incredible young musicians in my group to shine, with ensemble moments that tell a story that traverses the duality of happy or sad.

I hope that audiences will connect to the expression of these varied feelings and also be attracted to hearing something unique and new that is the sum of these varied influences. But ultimately, I think that people can’t help but connect with honesty.

Digital Event - Josh Kelly: “Jazz is a Folk Music. It is Fluid, Live…”